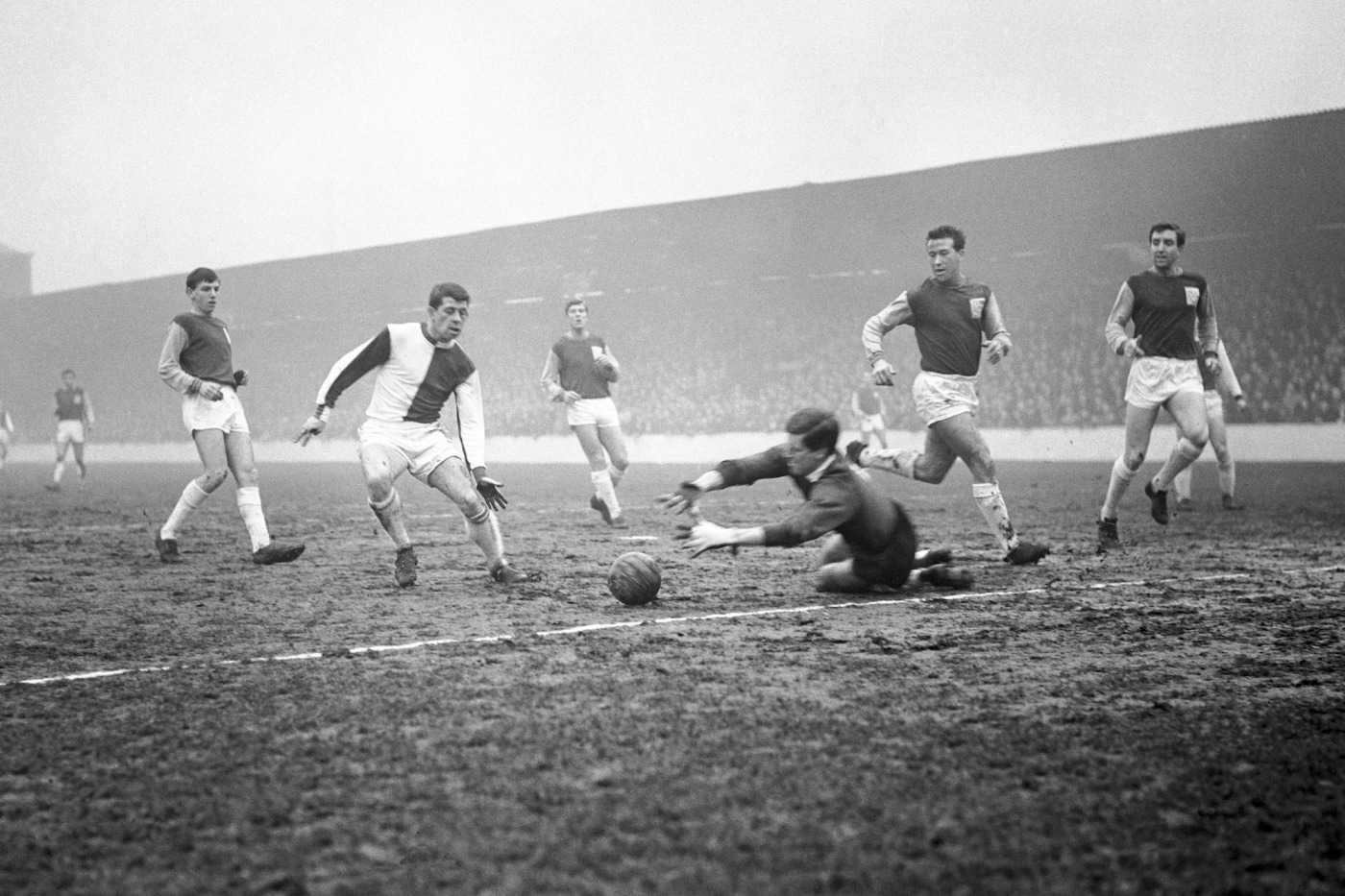 The hectic goal-fest of Boxing Day, 1963 when 66 goals were scored in 10 games in the English top flight Division One is probably the most epic day in English football history.

Some say that ‘the beautiful game’ isn’t the most exciting spectacle, perhaps because it’s one of few sports in which a game can finish without even a single goal being scored.

Yet football often throws up games of breathless action and Boxing Day 1963 served up a whole day of them with 66 goals in just 10 games.

It was the day after Christmas in 1963. It was still three years to go before England’s first and only World Cup triumph to date, Everton were the English Division One (pre Premier League) title holders, and AC Milan were the European champions. On this day 20 of the 22 Division One clubs were going to attempt to warm the hearts and bodies of spectators across the land, numbed as they were by artic temperatures during the ‘Big Freeze of 63’, with an exhilarating 90 minutes.

Firstly, Liverpool, who would go on to be crowned league champions that season, thrashed Stoke City 6-1 at home with club legend Roger Hunt scoring four goals. Hunt went on be a record goalscorer for ‘The Reds’ and played an integral part of England’s 1966 World Cup campaign.

Matt Busby’s Man United, meanwhile, were thrashed 6-1 away by Burnley with four of their goals coming from striker Andy Lochhead. The Guardian wrote: “The Clarets were organised and compact as they set about dismantling the FA Cup holders, and it was down to ‘Morgan’s mastery’ that a series of frustrated fouls ultimately resulted in a red card for United defender Paddy Crerand.”

Entertaining draws were played out by Sheffield Utd, who fought back to draw after going 3-0 down to Nottingham Forest, and cross-town rivals Wolves and Aston Villa also played out a 3-3 draw.

West Bromwich Albion and UEFA Cup Winners Cup holders Tottenham Hotspur fought out an eight goal thriller after Spurs let a 4-2 lead slip from their grasp to end the game even-stevens. Days earlier, West Brom’s players had gone on strike when they were told that they had to wear shorts to train in freezing conditions during the exceptionally artic winter of that year, but peace was reached ahead of their Boxing Day fixture and the Daily Mirror wrote that “the only crisis at the Hawthorns [West Brom stadium] was in the Spurs defence.“

Chelsea’s away victory over Blackpool meanwhile was won at a trot, with ‘the Blues’ scoring five goals to Blackpool’s one.

Then there was the game with West Ham v Blackburn. ‘the Blues and Whites’ showed why they were current league leaders by demolishing the London side a whopping eight goals to two which is their highest ever away win. Both England footballer Fred Pickering and Republic of Ireland international Andy McAvoy scored hattricks that afternoon and McAvoy went on to be the joint top goalscorer for that season. A reporter summed up the game thus: “Everything West Ham did was tinged with misfortune. Everything Blackburn did was coldly calculated and correct.“

Even that game was topped, however, when Fulham destroyed visitors Ipswich Town 10-1. ‘The Tractor Boys’ had been crowned English champions just 18 months prior, but in this game Bobby Howfield scored a hattrick and Scottish International Graham Leggat scored four goals including a hattrick chalked up in an incredible three minutes. That was a record fastest hattrick in Division 1 history. Fulham boss Bedford Jezzard said after the game: “It must have been those lovely turkeys we gave ’em for Christmas. From now on, they get one every week.” Ipswich chairman John Cobbold could only retort: “It could have gone either way, until the match began.” That result is both Fulham’s best, and Ipswich’s worst ever result respectively to date.

The two other results were Leicester City’s 2-0 win over Everton and Sheffield Wednesday’s 3-0 defeat of Bolton Wanderers.

That afternoon’s incredible haul of 66 goals scored in a single round of league fixtures compares to a Premier League record of 44 goals. It was a crazy day. Tottenham centre forward Terry Dyson, who played in his side’s 4-4 draw with West Bromwich Albion, remarked: “It was a bizarre afternoon of football, without a doubt.”

Even more remarkably, two days later the reverse fixtures were played out and some of those badly mauled teams turned the tables on their tormentors.

Despite how dominant their opponents had been on Boxing Day, West Ham would hit back at Blackburn with a 3-1 win, Ipswich overcame Fulham 4-2, and Man Utd retaliated against Burnley with a 5-1 thrashing. And Bolton Wanders also bounced back to beat Sheffield Wednesday 3-0 to cancel out their previous result.