This French General is famous for the many, many wounds he suffered in battle but survived. You'll be amazed the damage this bullet-magnet lived through! Nicolas Charles Oudinot was born in Paris, 1767. He was born to survive against the odds as just one of nine siblings to reach adulthood. He joined the Kingdom of... END_OF_DOCUMENT_TOKEN_TO_BE_REPLACED

The tale of the Japanese soldier's WW2 tour of duty that did not end in 1945, instead went on for an epic 20 years longer. Find out why Lieutenant Onoda refused to surrender and how he was finally coaxed out of hiding. It was a surreal moment for book store owner Yoshimi Taniguchi; it was... END_OF_DOCUMENT_TOKEN_TO_BE_REPLACED 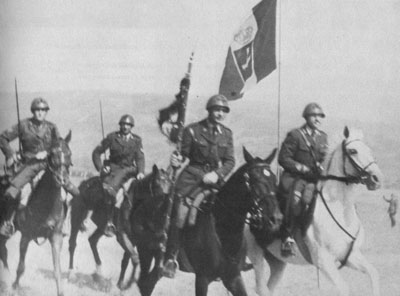 Amidst the mechanisation of the Eastern Front in WW2, Italy's much maligned military reputation received a shot in the arm when the Italian Savoia Cavalleria horse-mounted regiment daringly charged the Soviet army. It was August 1942 and the tide of WW2 was just beginning to turn in favour of the Red Army after the surging,... END_OF_DOCUMENT_TOKEN_TO_BE_REPLACED