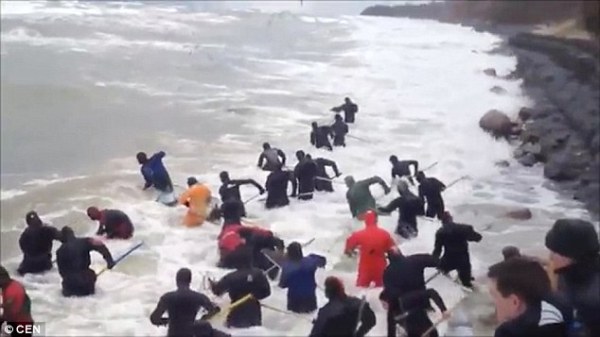 The oceans have always proved bountiful for coastal communities, providing not only sustenance but valuables lost in the sand or washed ashore from shipwrecks. For the people of the Russian enclave of Kaliningrad in 2015, however, the sea gifted a hoard of ‘Baltic Gold’. These gemstones gave them a much needed boost to their bank accounts when the economy was sluggish. Read about this gift from the sea.

Amber is hard, transparent fossilised tree resin, the sort famous for entombing tiny insects from prehistory for us to marvel at in their original state.

It is a gemstone used to make jewellery and a variety of decorative objects, and has been appreciated for its colour and natural beauty since Neolithic times.

In 2015 Christmas came early for residents of Pionersky in the Russian Kaliningrad region on the Baltic coast as a storm began washing up large deposits of ‘Baltic Gold’. Locals flocked to the beach to line their pockets.

Some, dressed in wetsuits, waded out up to 30 metres (100 ft) into the sea to catch large amber chunks, each worth hundreds of dollars, in cages.

The less intrepid combed the shoreline for smaller pieces, being able to collect a handful in just five minutes of feverish searching.

Even pensioners forgot their ailments and age and scratched the frozen soil with sticks like babies in a sandpit.

The timing could not have been better as these presents from nature helped people out during the country’s economic crisis and raised people’s spirits.