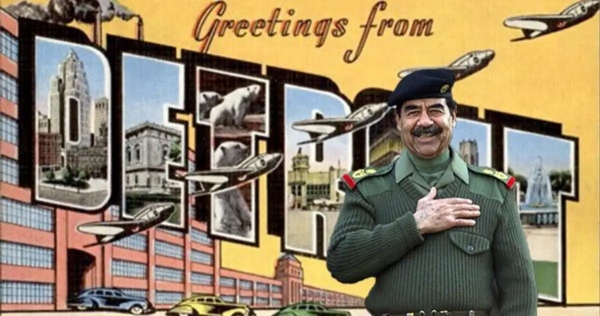 Saddam Hussein was public enemy no.1 throughout the ’90s, In 1980, however, he received the ‘keys to Detroit city’. Read on to find out why.

From the day his tanks rolled over the Kuwaiti border in 1990 until he met his demise in 2006 Saddam Hussein, President of Iraq, was public enemy no.1 in the USA.

First he invaded Iraq’s neighbour Kuwait in an act of naked aggression and conducted himself disgracefully during the 1st Gulf War. Then, for the rest of the ’90s Iraq remained a pariah state under his tyrannical rule until rancour across the West climaxed with the second Gulf War in 2003.

This time Saddam was firmly in the crosshairs; he was hunted down like a dog before being executed three years later.

What may surprise a lot of people then is that just ten years prior to the First Gulf War President Hussein was seen in a very different light within America. So much so, in fact, Saddam was bestowed the key to Detroit City — a symbolic meaning evoking medieval walled cities when the gates would be guarded during the day and locked at night.

The key symbolises the freedom of the recipient to enter and leave the city at will as a trusted friend of city residents.

In 1979 Reverend Jacob Yasso of the city’s Sacred Heart Chaldean Catholic Church had sent a congratulatory message to the newly appointed president.

Flattered, Hussein responded with a $250,000 donation to the church. A year later Yasso was welcomed to Hussein’s palace and there Yasso presented the president with a key to the city and kind words passed along by then-Detroit mayor, Coleman Young. Upon hearing of a debt on the church, Hussein soon sent another $200,000 Yasso’s way.

Looking back in a 2003 Associated Press interview Yasso recalled: “He was a very kind person, very generous, very cooperative with the West.”