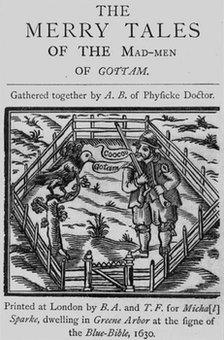 When the King of England wanted to build a road through Gotham village’s locale, the rustics knew there was only one way to get rid of his men; to play insane… Find out what absurd tasks they came up with acting fools.

It is difficult to determine the veracity of tales from such historical, murky depths as 13th Century England yet there’s likely truth to a tale mentioning Gotham village’s ‘foles’ (fools) or later ‘wise men’.

The villagers gained this sobriquet by displaying such cunning they warded off the attentions of the most powerful man in the land.

The story goes that King John I wanted to pass through the village and have a royal highway established in his wake, or that he wanted to build a lodge nearby – both needing the locals to contribute for its upkeep.

Faced with a stark choice between increasing their financial burdens or defying the king’s will, they took a third route; to dupe the King and his henchmen into believing they were a village of fools, or rather, infected with insanity. It was common belief at the time that madness was contagious so the notion of a village populated by lunatics was perfectly feasible.

So, on the day a royal herald turned up at Gotham’s bucolic locale in advance of the king, Gotham was ready for him. Wherever the man went, he saw the rustics engaged in some absurd task.

He first came upon some villagers embroiled in trying to drown an eel in a pool of water.

Bewildered, he then observed others dragging carts to a large barn to shade the wood from the sun.

His unease heightened as he then came across others tumbling their cheeses down a hill, that they might find their way to Nottingham for sale.

The king’s man recoiled at being in the midst of such imbeciles and the last straw came; he watched as villagers hedged in a cuckoo which had perched on an old bush: ‘The Cuckoo, as soone as she perciued her selfe incompassed within the hedge, flew away. “A vengeance on her!” said they “We made not our hedge high enough”’.

The king’s official withdrew. He reported that the settlement was brimming with lunacy and to avoid it like the plague, and so the ruse worked. “There are more fools pass through Gotham than remain in it.” Gotham’s ‘Wise Men’ boasted triumphantly.